August 2011 is the month for hot climates. I’m currently in San Antonio for the Academy of Management annual meeting and will soon be in Las Vegas for the American Sociological Association annual meeting.

Today, Thur., Aug. 12, 2011, 3-5pm CDT. I’ll be co-presenting with Prof. Tor Hernes, Copenhagen Business School, on using organizational ethnography to teach organizational design for the OMT Teaching Roundtables at the Academy of Management (AOM) annual meeting, San Antonio Convention Center: Room 216 A & B, San Antonio, TX. This is a description provided by Prof. Hernes:
“In this roundtable, I will describe an elective course for MS students at the Copenhagen Business School. The course typically enrolls ~80 students from 5-10 different countries (mostly Scandinavia). We use the book Enabling Creative Chaos, Katherine Chen’s ethnographic account of the development of the Burning Man event (2009). Using the book provides a common “empirical” basis for discussion in class, which is a way to compensate for the lack of organizational experience among the students who are typically age 23-27. The idea, rather than work from OD as the balancing of structure, culture, systems and technology (which is typically assumed), is to view OD as the ongoing attempts at framing the sense-making of organizational members. We work from OD as the combined use of various types of material, social and cognitive mechanisms that organizers employ as they are confronted with dilemmas of organizational growth and change.”

Sun., Aug. 21, 2011, 11:30-12:10am PDT. For my book Enabling Creative Chaos, I will be accepting Honorable Mention for the 2011 Max Weber Award of the Organizations, Occupations, and Work (OOW) Section of the American Sociological Association, OOW business meeting, at the American Sociological Association annual meeting, Caesers Palace in Las Vegas, NV.

Fun facts: Fellow Harvard grad student turned Northwestern professor Celeste Watkins-Hayes is also an Honorable Mention recipient, and Martin Ruef, who was a teaching assistant for my first organizations class at Stanford and now is a Princeton professor, is the winner for his book on entrepreneurship.

Volunteer labor can only support an organization so far. Without a steady source of revenue, an organization may not survive for long. Most organizations, including those not intended for profit, engage in some sort of commerce. In the U.S., governmental funding and philanthropy can provide funds, but not on a long-term basis. Therefore, museums run gift shops; universities host executive education programs and other summer camps; public transportation agencies sell opportunities to name their stations; non-profit associations might lend their trusted names to flog unrelated products and services. However, these extra activities may detract from an organization’s mission, or what some have dubbed “mission creep.”

An unusual opportunity to support the operating costs of the home and studio of artists Jackson Pollack and Lee Krasner in East Hampton, NY: 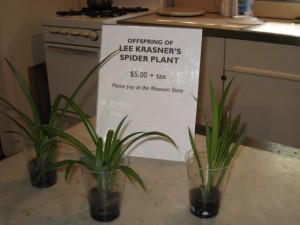 The past year has been a particularly eventful, if not unnerving, year for understanding the “life cycle” of organizations. Researchers argue that new organizations suffer from the “liability of newness” problem.* They lack sufficient infrastructure, legitimacy, and resources, and they are thus vulnerable to threats from regulators, competitors, and suppliers that can lead to organizational closure. The Burning Man organization has, at various points, faced such threats. With a combination of luck and support, it has survived its early years.

However, even well-established organizations may be unable to surmount problems. Some organizations die “quickly.” The collapse of a key banking and investment organization Bear Stearns over one weekend, and the subsequent frenzy of survival-oriented activity in other similar firms in the ensuing weeks as confidence weakened, took most people by surprise. Other organizations fail “slowly.” State intervention (i.e., the on-going General Motors bail-out) may prolong these organizations’ survival. Without such state activity, various large airline firms, railroad companies, and car manufacturers would have died years ago.

Competition from other organizations may accelerate decline. Such a selection process is evident in the disappearance of local independent bookstores.** In my old neighborhood, several independent bookstores folded over the course of a decade, leaving only one, my favorite (the Harvard Bookstore) standing. In my current neighborhood, with the recent closure of an independent bookstore, only two independents, Book Culture and Bank Street Books, remain. Large online firms don’t bear the high cost of storefront rent, and they have more muscle to negotiate with publishers. With these advantages, online firms have usurped independents. Independents that have managed to hang on (so far, at least) often rely upon a unique identity and appeal to attract supporters. Given Burning Man’s “unique” output of a week-long arts community, it’s difficult to imagine how competitors can edge Burning Man out.

More commonly, organizations that do survive their early and mid years face a succession and growth challenge. As original founders retire or are forced out, remaining members and new members may falter. As the organization grows in size, remaining members may miss the intimacy of the original organization, and newcomers may wonder what is so attractive or distinctive about their organization. One of the ways in which Burning Man organizers has addressed these challenges of succession and growth is to encourage members to set up their own local organizations and events. Through regionals and local events, supporters can find a more intimate, year-round community, rather than waiting for Labor Day weekend. Although the Burning Man event and organization may someday end, it’s likely that other events and communities will continue to embody the Burning Man ethos.