Thanks to Prof. Caroline Lee, a sociologist whose expertise includes the professionalization of participatory practices, I recently gave an invited lecture at Lafayette College in Easton, PA. Among other questions, students asked what kinds of people attend the Burning Man event. In particular, they were curious about participants’ finances.

Answering these kinds of questions is only possible because of survey research.* One of the first surveys administered at Burning Man was run by a theme camp called the Ministry of Statistics. Passers-by to the theme camp, which was located in the Central Camp area, were invited to complete the survey, and the Ministry of Statistics posted statistics on the collected data  during the event. The media reproduced several of these statistics, including one about drug consumption, in print, much to the dismay of Burning Man organizers who were concerned about the event’s legitimacy.

Here’s of a photo of 2008 participants diligently completing the survey in the Center Camp Cafe: 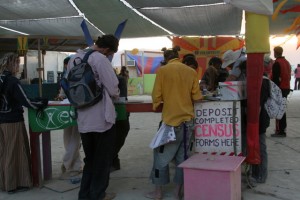 In other years, the Burning Man organization has also gathered self-reported data on how much participants spent on local businesses; such information was intended to show that the event benefited local Nevada communities.

*Also, the idea that one can quantify the “average” person is a relatively recent phenomena.  See historian Sarah E. Igo’s The Averaged American: Surveys, Citizens, and the Making of a Mass Public.

Organizations that have moderate to high turn-over among its members, such as McDonalds and other low-wage workplaces and voluntary associations, face a challenge. They must pass down knowledge that often is taken-for-granted (e.g., tacit memory about the correct sequence of, say, placing hamburgers on a grill or the proper steps for pulling together a meeting) to new members. Typically, organizations use routines, orientations and trainings, handbooks, and record-keeping to orient and acclimate new members. But what happens if these structures are not in place? The lack of such structures may be symptomatic of under-organizing’s insufficient structure or coordination.

For the Burning Man organization, such underorganizing was glaringly evident when key persons departed suddenly, forcing remaining and new members to re-establish departments from scratch.  For instance, operations for the Gate, or the entrance to the Burning Man event, had to be recreated after a key leader left without leaving records of how to run the collection of tickets. At one point, I realized that as a researcher who had observed organizing activities over the years, I was a source of tacit organizational memory for others.  I was the one who reminded a volunteer manager that pamphlets had to go to the Gate for distribution to incoming participants; at times, I shared a version of my field notes for those who wanted a record of meeting activities.

In subsequent years, Burning Man organizers have introduced ways of sharing knowledge among members via volunteer mixers, departmental handbooks, record-keeping, and teamwork.  These changes have since smoothed over transitions as members depart or join.  Undoubtedly, not all knowledge passes down, which suggests the potential for re-invention or innovation.

These are terms used in my blog and book.  Most of these terms are commonly used among Burners.

Burning Man organization or Project – formal name is Black Rock City Limited Liability Company, but most people use the old term Project or affectionately refer to the BMOrg

Organizers – those who head the organization

Staff – both paid and unpaid members

Participants, event attendees, and Burners – those who attend the event; a small percentage of these persons also volunteer for the organization

When I first started studying the Burning Man organization back in 1998, the organizers worked from their apartments. For meetings, they borrowed office space, such as Joegh Bullock’s Anon Salon/Climate Theater down in SOMA, San Francisco.  The next year, organizers rented a small office space at 3450 Third St., an unassuming building with white tile and blue trim, which they furnished with scavenged furniture.  This move allowed organizers to establish everyday operations and routines, as well as host meetings for volunteers.  I have fond memories of taking field notes on meetings and other activities while perched at a repurposed dining table supported by a stack of buckets!

After the dot-com bust eroded the once-white-hot commercial space rental rates (sound familar?), organizers signed a lease on a larger office space at Third and 16th streets, where their headquarters is currently located.  This lease will expire by the end of this month, and their building will be torn down under the University of California at San Francisco’s redevelopment plan.  The Jack Rabbit Speaks newsletter reports that the Burning Man organization will move some operations into a temporary space while some will telecommute from home.  It would be interesting to see how this move might affect their organization.