One of yesterday’s WSJ front page articles (“Volunteers Log Off as Wikipedia Ages“) examined the increasing turn-over among volunteers for the on-line encyclopedia Wikipedia. The article discusses the difficulties of monitoring the content contributed by users. Both the comments and article suggest that size, age, increasing rules, and a lack of accountability among anonymous users make Wikipedia a less attractive venue to potential contributors and discourage the continued participation of current contributors.

After mulling over this news article and other research on participatory groups, I would also suggest other possible reasons for a decline in Wikipedia’s participation, as well as a different perspective on the usefulness of Wikipedia:
(1) Most people don’t have experience with participatory practices and need to learn to flex those muscles, which results in inevitable bumps and attrition among those who privilege efficiency over collective discussion.
(2) More problematically, outside of the academy,* people don’t agree on what constitutes a fact versus an opinion, much less understand the research process. I would speculate that a heavily politicized education (i.e., creationism/intelligent design taught alongside evolution as a theory) or an insufficient education make it more difficult for people to make distinctions between facts and opinions.
(3) Since Wikipedia began 8 years ago, it’s possible that declining participation among old-timers may be inevitable due to changing interests and competing responsibilities, such as raising a family. In addition, the intensification of work as employers demand longer hours and/or downsize staff reduce the amount of free time that both new and longtime volunteers can offer.

So, what might Wikipedia really tell us? Rather than thinking of Wikipedia as only a factual, consensus-based encyclopedia, Wikipedia might offer us insight into phenomena over which consensus has not yet been established, as well as the different stakeholders who get involved in the construction and dissemination of knowledge.

* Of course, academics have their own disagreements about what constitutes proper research.

In my Burning Man research, I discussed how organizers had to establish a new field for running a temporary arts community, which included working with governmental agencies to develop applicable policies and regulations. These efforts are also crucial for other organizations.

This past week, one of my City University of New York (CUNY) colleagues at Hunter College, Howard Lune, won the ARNOVA Best Book Award for Urban Action Networks: HIV/AIDS and Community Organizing in New York City (2006, Rowman & Littlefield). I highly recommend this book for those who want to understand how community groups can engage in collective action to construct a new field of organizations and institutions. In the United States, we now seem to take the prevention and treatment of HIV/AIDS for granted, as many organizations and programs are devoted to these aims. But, this was not always the case – in fact, during the 1980s, both the U.S. government and medical profession were slow to recognize HIV/AIDS as a problem for the general population, and neither institutions were not prepared to deal with the outbreak of a new, not-yet-well-understood disease. Lune’s book shows how a network of activists and advocacy groups in the New York City area were crucial to establishing a new field for HIV/AIDS prevention and treatment. Collective, coordinated, grassroots activity focused state efforts on addressing a national (and worldwide) problem.

Another co-winner for the ARNOVA book prize is The Volunteers: A Social Profile (2006, Indiana Press) by Marc Musick and John Wilson. I haven’t read this book yet, but I’m glad to see it’s now available for those of us who want to understand more about volunteerism.

P.S. An interesting instance of the interplay between scholarship and art: Lune’s book cover features an artist’s sculpture of the genetic material of the HIV virus.

This Thur. 11/19/09 sometime between 3:15-4:45pm EST, I will be giving a short presentation, called “Laboring for the Man: Augmenting Authority in a Voluntary Association,” on the “Values, Culture, and Voice” panel at the Association for Research on Nonprofit Organizations and Voluntary Action (ARNOVA) conference. The conference meets at the Renaissance Cleveland Hotel, 24 Public Square in Cleveland, Ohio. The talk will be in the “Severance” room.

On a different topic, for those of you who get the Stanford alumni magazine, see p. 77 of this month’s issue. My alma mater has also featured my book at this link.

In “Chip Conley: Should I Take My Burning Man Pics off Facebook?“, a CEO of a chain of boutique hotels muses on the consequences of sharing his non-business life, including the end of a 8-year-long relationship and a trip to Burning Man, shared via social networking tools Twitter and Facebook. Apparently, younger members of his firm expressed concerns about the CEO’s sharing his life and extracurricular activities via posts and photos.

Other renowned business leaders, including Google co-founders Larry Page and Sergey Brin, are known Burners, but none (at least to my knowledge) have been publicly criticized for participating in Burning Man. A few comments to the article sneer that CEO Conley is trying too hard to be cool, while a few other comments condemn the CEO as a hedonist.

However, most posts are supportive. Like the majority of posters, I think it’s healthier for an organization when its leaders and members have outside interests and responsibilities. Otherwise, the organization risks turning into a total institution that overworks members. 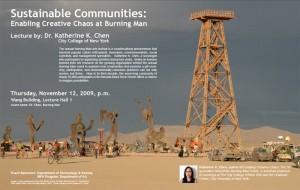 Regardless of the economic situation, making an honest living from the arts is never easy. The rewards tend to be concentrated among the top stars, so the majority make do with other careers or odd jobs. However, an economic downturn might bring about unexpected opportunities. During the Depression, the Works Progress/Projects Administration (WPA) provided jobs for those who were out-of-work. Under the WPA, artists generated murals and other works, contributing art that is now part of the everyday experience.

In an interesting, contemporary meta-art-project, the Work Office is trying to raise funds to support NYC artists on WPA-era wages of $23.50 per week. Artists are tasked with “simple, idea-based assignments to explore, document, or improve life in New York.” According to the project’s description, the two leaders “will perform the dull bureaucratic work that ensures that their employees make artwork.”

Such a juxtaposition suggests that bureaucracy and creativity are uneasy partners. Some, like Steven Dubin, who studied a governmental-funded Artists-in-Residency program in Chicago, are skeptical about the abilities of bureaucracy to support the arts. My research on Burning Man suggests that when judiciously applied, bureaucratic practices can enable creativity.

*I almost wrote “recession” in this entry’s title, but we’re still waiting for the official announcement from the National Bureau of Economic Research (NBER).