In an earlier post, I shared a link to Craig Duff’s piece, “5 Things Cities Can Learn From Burning Man.”

One reader wanted to know more about the fourth lesson, when Larry Harvey talks about “shame [being] more efficacious than virtue.” Rather than speculating, I emailed Craig Duff to ask him to elaborate on that point. Duff emailed back to explain that Harvey was referring to how Burners practice “Leave No Trace,” in which they pack out their own trash. In the past, Burning Man organizers would publish a “list of shame” identifying theme camps by name that had left behind debris. Fellow Burners would then chastise those camps. As many active Burners know, reputation matters. The “stick” of (potential) public humiliation is enough to compel some people to comply.

On the other hand, what’s even more compelling is Burning Man’s innovative use of “carrots.” That is, people think of creative ways to make otherwise dreary activities – like recycling or picking up trash – fun and even enjoyable. In my book, I talk about the origins and intent of Recycle Camp, which collects and crushes aluminum cans. Co-founder Simon Hagger wanted to make the activity of recycling fun for people, so he built a special pedal-powered contraption to crush cans, and he also gave mallets for people to hand-crush cans. He said that some people seemed to imagine their least favorite person, such as their boss, as the target while whacking the cans. (Managers, take note: maybe you can kill two birds with one stone: sublimate your underlings’ unhappy feelings into recycling.)

Recycle Camp still continues that tradition today. Check out this photo of Recycle Camp from this past event, 2009: 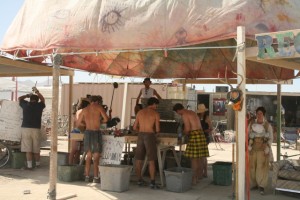 Volunteers bicycle around the city to collect cans, and people also bring their cans to Recycle Camp. The fellow at the left is transferring collected cans into a container, which he will then dump onto the sorting table. At the sorting table, people push recyclable cans towards the middle, where a person (in this photo, the guy wearing the white vest) pedals two large wheels that crush the cans for recycling.

So there you have it: Burning Man’s version of the carrot and the stick. To close, Duff’s take-away point for cities is to “foster…virtue, even if you have to shame people into it.”

2 Replies to “Shame and Virtue at Burning Man”